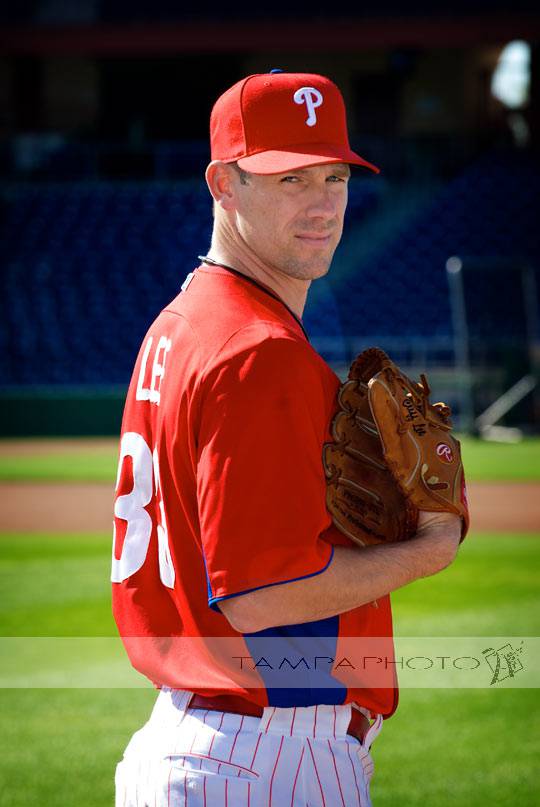 Recently, we got a call from Mary Ann Bryszewski, Creative Director for Holman Automotive Group, a family-owned auto dealership in Pennsauken, NJ. Mary Ann needed photos and video footage of Philadelphia Phillies pitcher, Cliff Lee, who has teamed up with Holman Automotive in an effort to raise money for CadeKids, an organization dedicated to teaching kids how to avoid violence and drugs.

On the day of the shoot, a Spring training day at Brighthouse Network Field in Clearwater, we met with Bill Cariss, VP of Dealership Operations for Holman Automotive, and Mindy Holman, President and CEO of Holman Automotive Group. The plan was to utilize a short window of opportunity, in Cliff Lee’s schedule, to get testimonial footage and photographs of Cliff, both posed and in action for Holman Automotive to use their website, print and billboard ads.

The session with Cliff was a bit tense – only because every few seconds we’d hear someone shouting “heads up!” as a fly ball came hissing across the third base line before slamming into the ground nearby.

Despite this distraction, Cliff was very accommodating, and we soldiered on. While I concentrated on fulfilling the shot list, getting shots of Cliff in his Philadelphia Phillies uniform, Mj caught some great candid moments that were out of my frame.

In the end, it was a great day at Brighthouse Network Field – We got to meet and photograph Cliff Lee of the Phillies, we got to work with the great folks from Holman Automotive on their CadeKids project, and none of us caught a fly ball with our head. Bonus.

Here are some of our favorite shots from the day.